Taro also read a card from the Moses Lake Medical Team thanking the club for the $1000 donation to their Central America project.

2nd Harvest food distribution volunteers needed. On Wednesday, Sept. 18th, at the Wenatchee Community Center (corner of Chelan St. and Spokane St.) starting at 10:45 a.m. volunteers are needed to help meet the truck, unload and bag the food items, and distribute them to those coming to the Community Center. We will work until 2 p.m. Contact Jim Adamson (509-630-8562 cell) for more information.
Senior Dinner - Jill Courtney asked for volunteers to help organize the Senior Dinner, which will be held on Sunday, October 27th  Saturday, October 26th (new date) at the Wenatchee Senior Center. A planning meeting is scheduled for Friday, Sept. 20th at Bob's Classic at 7:00 am.

The Gorge Amphitheatre Fund Raising - Wayne Massing shared with the club the fund-raising numbers for our selling beer at the Watershed and Dave Matthews Band concerts at The Gorge this summer. We raised $2008 from the Watershed concert and $1062 from the Dave Matthew Bank concert for a total of $3071. The check will be coming soon from The Gorge to our club. The 5 Rotary clubs worked a combined total of 910 hours at these two concerts. The club's Board of Directors have chosen not to use The Gorge in the future as a fund raiser. Long hours, the long drive and small returns were some of the reasons.

Ron Griffith's yard project - PJ Jones visited Ron Griffith to assess the yard clean-up job he had requested. It was determined that leaves need to be raked up and the lawn mowed. It was suggested that we do the work later when all the leaves are off the trees. It would be about a 2-3 hour project for club volunteers. More information to come.

Check out September birthdays and anniversaries in the right hand column.

Kathleen McNalty spoke briefly about her 2 week trip around Spain. She cycled with a group of people, and visited the northern coast of Spain. The weather was mostly good with a bit of rain!

Rebecca Lyons also traveled, but to Hong Kong and India related to her job at the Washington Apple Commission. She told of observing the arduous task of picking and transporting apples on the slopes of the Himalayan Mountain foothills.

Milt Herman thanked Earl Crowe for contributing used glasses for his Central American medical team. He would like get other contributions of used reading glasses, non-prescription sunglasses, prescription glasses, handheld magnifiers, and unopened eye medications or drops. They can be brought to the club meeting and put in Milt's bag in our club's cabinet at Pybus.

Kevin and wife Lynn Love spent 10 days in the Gulf Islands and San Juan Island on their boat. 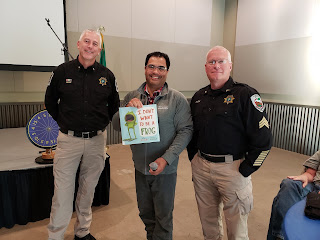 Chief Deputy Chris Sharp and Mike Smith, from the staff of the Chelan County Jail, gave a vivid look at the jail and its staff. Their goals at the jail are to provide a safe and secure environment for the staff and the inmates. Most of the inmates are there for drug related crimes. A K-9 dog and mail scanner are two new methods used for scanning for drugs within the jail. A lease body scanner will be used in January 2020. Newer transport vehicles aid in the safe movement of prisoners. The jail experiences a heavy turn-over in staff, and lengthy training is required for new hires. Cameras are being installed in the cells and in the corridors to decrease the crimes within the jail. The program ended with Chris Sharp taking questions from the club members.

PJ Jones won the pot and donated the money to the dog fund at the jail.