Adele, our exchange student from Switzerland, came to her first meeting with us. She is a junior in high school and so far has attended to the club picnic, and gone tubing for the first time.  Scroll to the pictures below.

August 29th is the back to school bash at West Side High school it is 3-5 P.M. and we are still looking for volunteers to help.

Jim A. gave out 11 gift cards  to those who have in the past has 100% attendance including make-ups.

Chris McDarment is hosting a past exchange student

Milt Herman just got back from Denver where he was attending his 60th school reunion. 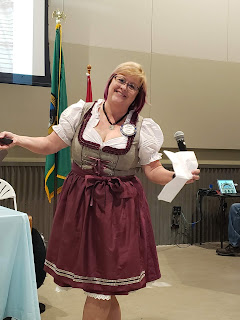 Robin gave us the rundown of her Pre-RI trip starting in Frankfort and ending in Berlin. There was a lot of beautiful pictures full of history to see.
By Kaitlyn V. - August 27, 2019 No comments:

BBQ at the Orchard, August 18 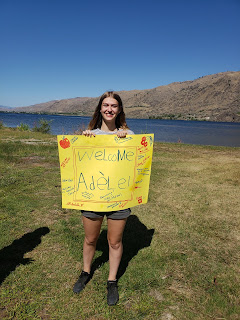 Sunrise members, families, and guests joined together at Tom Utigards' orchard on the Columbia River Sunday afternoon for a BBQ to meet Adele Ayer, our exchange student from Switzerland.  Also attending were her first two host families.  Thanks to PJ and Cookie for organizing the BBQ, and setting everything up on Sunday.  Check out the pictures.

Adele getting some American food

Host families - the Loewen's and Mueller's

The Loewen family with a welcome card for Adele 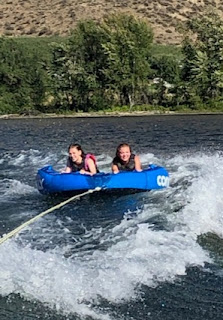 Karen Massing was the guest of Wayne Massing.

-PJ Jones announced that there will be a BBQ at Tom Utigard's orchard 10 miles North of Wenatchee on Hwy. 97A, on Sunday, Aug. 18th from 1-4 pm. This is to welcome our new inbound exchange student Adele from Switzerland, and her Wenatchee host family. Attendees with names starting from A-L, please bring a salad; those with names M-Z, please bring a side dish.

-Sage Hills Church is looking for help with the Westside High School back to school bash on Thursday, August 29 from 3-5. This is a fun event for families and students. There will be food, games, and prizes. All three of our Challenge Scholars this year are from Westside! Let’s show them some love. Consider helping out with set up, clean up or staffing a booth. Contact Kelley Kennedy at kelleyk@impactevents.com or 509-387-1411.

-PJ Jones  announced that last week he collected $450 in donations for the Saddle Rock Evangelical Presbyterian Church  to clothe school children in the community this school year. For a $25 donation, the child receives a pair of pants, 2 shirts, socks and a pair of shoes. The Wenatchee Sunrise Rotary Board of Directors voted to match the $450 donation for a total of $900! That 36 students who will have new clothes for school this year!


-Kathleen McNalty invited the club to a Pony Party at the Alethea Center, 2170 Sleepy Hollow Heights, Wenatchee, on Tuesday, Sept. 24th at 5:30 pm.

August Birthdays and anniversaries in the right hand column

Robin DeRock said she got her husband Richard back after the Link Transit Proposition #1 passed. Her husband wrenched his back picking up an air compressor. Her nursing skills were tested!

Joel Banken announced that his son had arrived in Mumbai, India, and had met his next two host families already.

Milt Herman would like to collect used prescription and reading glasses, sun glasses, magnifiying glasses and unopened eye drops for his Guatemalan trip in October.

Kevin and Lynn Love attended the Seahawk Training Camp. They also drove their boat up to Stehekin on Lake Chelan, and spent the night moored to the dock for $7.50 (up from $5).

Erik Holmberg enjoyed time at the beach until his wife hurt her back. Today their cabin on Lake Chelan is being demolished to renovate it.

Erik Holmberg fined the greeters for not greeting, and for being late!

Erik also recognized Wayne Massing for working 6 shifts and his wife Karen for working 5 shifts over the 3 days at the Watershed Concert!

PJ Jones, one of the Sargeant-At-Arms, was fined for his confronting a woman at the Watershed Concert about her hair color!


Program
Lee De La Torre, from The Diamond Foundry, was the guest speaker. Lee is a manufacturing engineer and is the primary person responsible for the construction and installation of The Diamond Foundry in Wenatchee. He came to Wenatchee from the Bay Area of Calif.

Lee described the process of diamond making as "growing diamonds", since each diamond produces starts as a small slice of diamond. That slice gets carbon added to it in a proprietary process to make a grown diamond. They are 100% carbon.

By comparison, mined diamonds are from artisanal mines, mainly in Africa and Russia. About 250 ton of dirt must be moved for each 1 carat diamond unearthed. There are about 1 million miners working for about $1 per day.

Grown diamonds are produced in the USA. Their vertically integrated process has about 14 steps from the manufacturing process to being a piece of jewelry. The Diamond Foundry does many of these steps themselves, but has other help in the processes.

The basic process is described as a diamond seed or slice put into a "reactor", and is heated up to 10,000 degrees. It is bombarded with carbon gas and the carbon atoms attach themselves to the seed. The process to grow one diamond may take weeks, but many are "grown" at once.

Their diamond are serialized and grown to >9+ carats. The costs are typically between about 10-25% of the cost of mined diamond. Each grown diamond can be finished into one of 40 different cuts. Their production should start within 2 to 2 1/2 years. Sixty per cent of their employees are from the Wenatchee area, with many veterans being hired. New workers are trained on site. 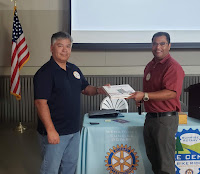 .
Meeting was adjourned at 8 am.

Bob Bugert from the Wenatchee Rotary Club was a guest of Jim Huffman's. Bob is a member of the Chelan Douglas Land Trust.

Wayne Massing thanked all the volunteers who worked at The Gorge this weekend, selling beers at the Watershed Concert. These Wenatchee Sunrise Rotarian volunteers spent a collective 161 hours: Taro Masuda, Erik Holmberg, PJ Jones, Robin DeRock, Kathleen McNalty, David Barshes, John Schapman, and Wayne & Karen Massing. They are shining examples of  Rotary's motto "Service Above Self".
The next concert where we are volunteering is the Dave Matthews Band on Friday, Aug. 30th, Saturday, Aug. 31st, and Sunday Sept. 1st (Labor Day Weekend). Volunteers are still needed for this concert. Each day's volunteer work is only one shift (unlike Watershed, which was 2 shifts). If you're interested, please contact Wayne Massing (wkmassing@nwi.net) prior to 3 pm this Friday, Aug. 9th. We have to submit the number of volunteers from each of 4 clubs to The Gorge early for location assignments.

PJ Jones announced that there will be a BBQ at Tom Utigard's orchard 10 miles North of Wenatchee on Hwy. 97A, on Sunday, Aug. 18th from Noon to about 4 pm. This is to welcome our new inbound exchange student Adele from Switzerland, and her Wenatchee host family. More details next week on what to bring.

John McDarment said the dedication of the second picnic shelter at Rotary Park on Western Avenue in Wenatchee will be Wed., Aug. 7th at 6 p.m.. Please plan to be there!

Kathleen McNalty asked the group in an ad hoc survey what were some of the reasons that they could not volunteer for selling beer at The Gorge Amphitheater. Some of the answers were: family or business travel, vacation, the heat, too long of a drive at night, and may not support the Rotary mission.


Sage Hills Church is looking for help with the Westside High School back to school bash on Thursday, August 29 from 3-5. This is a fun event for families and students. There will be food, games, and prizes. All three of our Challenge Scholars this year are from Westside! Let’s show them some love. Consider helping out with set up, clean up or staffing a booth. Contact Kelley Kennedy at kelleyk@impactevents.com or 509-387-1411.

RP Jones asked for donations to the Saddle Rock Evangelical Presbyterian Church is collecting funds to clothe school children in the community this school year. For a $25 donation, the child receives a pair of pants, 2 shirts, socks and a pair of shoes. At today's meeting, $450 was collected for club members. The Board of Directors will decide if the club can match those funds!

Craig Reese leaves for his annual volunteer trip to Burundi. He requested an old laptop computer (memory scrubbed clean!) to take with him. The school where he volunteers needs a replacement computer because theirs crashed. Please contact Craig if you can help (craigreese12@gmail.com or 509-679-3281) before he leaves Thursday (tomorrow!).

John Schapman has Thank You cards for the 2019 Bike Ride sponsors. Please contact John if you need one (jt.schapman@gmail.com).

Program
Jim Huffman presented a TED TALKS on "The Unexpected".

Meeting was adjourned at 8 am.