Earl Crowe is the Chief Deputy Coroner, serving in that role for the last three years.  He must love a crowd because he shares his home with his wife, Joy, three children, Kaitlyn, Emma and Lucy, as well has Joy's parents, David and Nancy. He clearly is used to chaos and should fit right in with our Club.  Earl plans to run for office as Coroner when the incumbent retires.


Shelly and her husband Stephen both work for Confluence Health. Shelly works as an insurance specialists and Stephen works in radiation oncology department.  The Millers relocated back to Wenatchee in 2009 from a 20 year stint in Twin Falls, Idaho.  They have four grown children and four grandchildren with a fifth on the way.  Shelly loves to cook!  That will come in handy.

Nima is a first generation Iranian American, born in Virginia.  His career and calling is local church ministry.  He works for Saddlerock Evangelical Presbyterian Church.  He and his wife Emma have been married for four years.  It's great to have young newlyweds in our group.

Make a Difference Day.  A dozen Club members helped at our highway cleanup project on October 24th. Thank you to Wayne, Carol, Jerry, Stacy, Milt, Joanne and husband Aaron, PJ, Norm, Kathleen, Jill, and Mansour for turning out to pick up 46 bags of trash over 33 hours! It's a stretch to say cleaning up the highway is fun but we had good company and got some exercise.  We received many warm greetings from those driving by who honked in support. Carol Adamson had her own fan club yelling her name from the moving vehicles. (You can't take her anywhere!)

We also had helpers on Sunday to clean up the garden for the year.  Thanks to Lesley Trebotich, Mike Coleman, Wayne Massing, Earl Crowe, Dave Friemuth, and Mansour for helping with this.  It's great to see so many new Club members are getting involved in our community service activities. 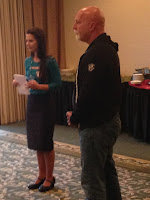 The Dragon Fly Retreat.  Brett McDonald a Mental Health Counselor (and Joel’s wife), who specializes in eating disorders, talked about her “relational distribution theory." She and her business partner, Joseph Siminet, marshal arts and life coach, run the Dragonfly Retreat.

They used four of our members to demonstrated one of the movement techniques used to explore personalities.


The premise is that some people can learn and relate better using movement, and can move forward with treatment when they understand their needs and unmet needs.  The theory relates to how resistance, and focusing on that, can keep a person from reaching their goals.

For more information, check out www.thedragonflyretreat.com.


Rotaract Club WVC Update.  Thanks to Jim Huffman, Jim Adamson, Matt McColm and Wayne Massing for attending the meeting last week of this newly forming Club.  It's fun to see young people get involved in Rotary.
By Kathleen McNalty - October 30, 2015 No comments:

It was nice to have a visiting Rotarian from Italy join us today.  Luca is vice-president of a company that sells equipment to the large fruit packing plants in the area.  He exchanged his club's banner (with the Ferrari logo) with Wayne.

Thanks to Wayne Massing and Stacy Speer for the time spent painting at the Grief House.

Our Ecuadorian exchange student, Mateo, flanked by host brother Regan, and host mom Patti.  Mateo has been here just a couple weeks, and has assimilated well into the Masuda household, and into school.  He lifts weights after school.  Mateo's English is very good.
Let's all make an effort to take him to coffee, dinner, or even on an out-of-town trip.  We want to make his year special.


Nice to have a full slate of greeters last Tuesday.

Youth Exchange:  Mateo arrived on Saturday.  He is staying with Taro and his family.  He goes by the name Claudio at school but his family (including his new family in Wenatchee) call him Mateo.  He is enrolled at Wenatchee High School and is jumping right in to sports by playing soccer.  We will get to meet him at the TGIF this Friday at Wayne and Karen's house.

Holiday Party.  We have three options to consider:  Bonaventure catered by Andreas Keller restaurant (Jay Higgins' wife Heidi owns the restaurant), Lulu's with Richard, or Chateau Faire La Pont. You will get a chance to cast a vote at our next meeting or you can vote by email.  Look for an email from Bill McDowell.

Sun Mountain Lodge Weekend.  Norm reminded us to visit Winthrop the weekend of October 29th when you can get three nights for the price of two, Thursday, Friday and Saturday.  Let's support area businesses that had a bad tourist season due to fires. 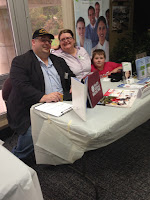 Senior Damboree at Rocky Reach Dam.  Suzie McColm, wife of our President-elect Matt McColm, had a table at the event to offer information about Medicare insurance coverage.  They were joined by their son, Nick. Several hundred people attended the event which included a salute to veterans, square dancing lessons, and tables representing a large selection of senior services available in our area.

Rotary Development Weekend in Osoyoos, BC is October 30th and 31st. This is a fun weekend and a great price on the resort accommodations.  You can register here http://www.crsadmin.com/EventPortal/Registrations/PublicFill/EventPublicFill.aspx?evtid=0d822cc5-1494-4bf0-b1fb-27e2f6fbf020

Jess Montoya.  We we sad to learn of the passing from cancer of Jess Montoya, a charter member our our club.

Club Assembly.  Wayne led us in a discussion of the club's Visioning Goals and where we are with meeting those goals.

Youth Exchange.  Mateo (also called Claudio) will arrive on the 5 pm flight this Saturday at Pangborn.  Please be there to greet him if possible.

Past Presidents Club Meeting.  Organized by Carol and scheduled for October 20th in the evening at Carol's with wine.  Sounds fun; we should all be past presidents!

Alatheia Riding Center.  Thanks to all who attended the gala fundraiser and contributed to this group that offers therapeutic horseback riding for the disabled.  They raised $148,000 in one evening!  This takes them very close to their 2016 projected operating budget of $225,000.

Alice and Mitch Thompson have installed cameras at their Elk City home.  They can now watch their property from afar using a computer or phone.


Kathy Hamilton is back after a bit of an absence.  She paid up for a recent birthday.  Thanks Kathy and welcome back!

Lesley Trebotich and Mike Coleman returned from a trip to Glacier and Yellowstone.  They travelled 2,051 miles with a new trailer gig.  They enjoyed (not really) being surrounded by tens of thousands of other tourist in Glacier on free admission day at the park.  Yellowstone was high season for Japanese tourism.  A nice quiet trip with a few thousand new friends.  Sounds like fun! 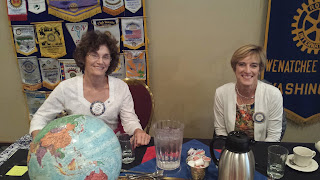 Program.  Kathy Weafer and Joan Wright described and shared photos of their respective trips abroad.  Joan visited Bali, Indonesia in the later part of March just before the Hindu new year celebration. This is a good time to go. She spent time in Ubud, which is a cultural and artistic center in the interior of the island, Amed on the coast, which has nice snorkeling and beaches and in the Kuna area where most of the tourist hotels along the coast and beach area are located.  Kathy's trip was to South America.
By Kathleen McNalty - October 06, 2015 No comments:

Caring for Kids in the Congo -- Linda and Wayne Mendro 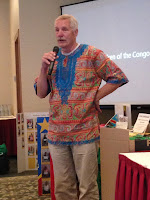 Milt Herman introduced his friends Linda and Wayne Mendro who are dedicated to supporting orphans in the Congo. 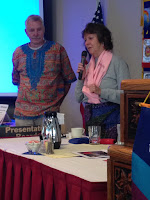 Linda and Wayne are from the Methow Valley and have been involved with orphans in the Congo since 2003.  They work through Mama Chansa, a married Methodist woman and an abused orphan herself, who opened her humble home in a Lubumbashi slum to local kids.  She named her home Peniel House, after the time Jacob met God face to face as described in Genesis 29. 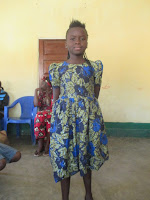 Mama Chansa houses the kids and sends them to school at the local Methodist, Catholic, or public schools.    School is the Congo is not free; it costs about $200 per year.  Linda and Wayne are seeking $200 per year to "adopt" these students.  The money covers school fees, uniforms, books and shoes.

We are happy to report one adoption occurred during the Mendro's visit to Rotary! At left is Kesia Kasongo, the newly adopted student of Kathleen McNalty and Steve Wright.

October 16 TGIF at Wayne and Karen Massing's house in East Wenatchee.  Bring an appetizer and beverages of choice.  Families and kids are welcome.  We promise to behave ourselves....mostly. 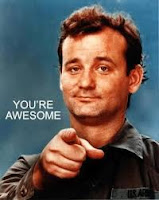 Website Update.  Joel McDonald is getting our websites in shape.  He proposes a single "landing place" for both the bike ride and club websites.  He is seeking bidders.  Let Joel know if you have any website suppliers you recommend.  He has a healthy selection.  Thank you Joel for this much needed work!  You're awesome.


Welcome Mateo, Youth Exchange.  Mateo's visa is approved and he will arrive on the 5:00 (ish) flight from Seattle on October 10.  Mark your calendars to be there and extend a warm welcome.