Please keep posted about the May 15th meeting.  The location might be changed.

Alan mentioned that the All Service Club luncheon is coming up on May 2nd.  $25.00.


Today was a Club Assembly by President Elect, Lisa Parks.  We discussed the Why of Rotary and she played this Simon Sinek video is definitely worth a listen about Starting with Why.
By Unknown - April 26, 2018 No comments:

Upcoming Dates to put on your calendar:

Elza celebrated her birthday on April 4th and had a great time.  She is headed to California.  She has also been asked to prom!

Rotarian of the Month is Kevin Love.  Thanks for all you do, Kevin!

Alan is looking for some help for the Apple Blossom Youth Parade on April 28th.  The time is 9:00-1:30 and it is basically helping along the route, making sure cars don't come into the parade.  AND you get a free t-shirt!

Milt updated us on Alex Rodriguez.  He was a Rotary Scholar and is now a senior at UW.  He is preparing for Medical School.

Jane Davis gave her classification talk.  If you weren't there, you really missed out.  Jane has a fascinating story and is inspirational on so many levels.  Thank you for sharing Jane! 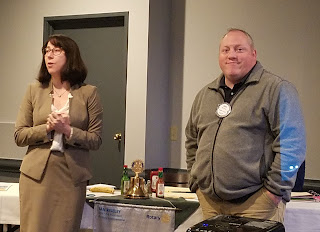 Congratulations to Earl Crowe for being named our "Change-maker of the Year".  This is a club award that will be recognized at the district conference in Prosser later in May.  Earl has done an outstanding job with club projects/fundraisers, Challenge Scholar work, and hosting our exchange student.


Wayne Massing is our district spokesperson who will be promoting the 2019 RI Convention in Hamburg, Germany.

April 22 is our highway clean-up in the afternoon.  More details later.

Fundraiser - working the concessions and/or other areas at three different concerts at the Gorge Amphitheater will be a great fundraiser.  We need volunteers for a total of 7 days this summer (pick one, or more if desired).  There will be a training on Wed., April 25 from 5:30-8:30. If you can't make it to the training, others in the club can train you.  Venue to be announced.  Spouses are welcome.  Dates are Aug. 3, 4, 5, Aug. 31, Sept. 1, 2, and Sept. 29.  Try to commit to at least one day.  It will be fun, and we can make good money for our club.  Contact Wayne Massing if you have questions, and to sign up.

The WHS Interact Club is now building the Habitat for Humanity house on Methow Street.  Contact Susan Albert of the Wenatchee Rotary Club if you want to volunteer to help build the house.
Also, the Interact club collected 100 pounds of books to go to Tonga.  It is too expensive to ship them, so members of the Interact club and a couple Wenatchee Rotarians will be delivering them to Tonga.  They are looking for 50,000 more air miles.  If you can donate air miles, contact Susan Albert (salbert345@aol.com or 679-4661).

Milt Herman announced that he will be going on another medical mission trip to Nigeria.  There will be a free concert by "Breath of Aire" on Saturday, April 7, 6:00 pm at the Grace Lutheran Church  (1408 Washington St.).  A free-will offering will go to support the medical mission team.  This bein one of our international projects, the club donated $2000.

Remember to sign up for the Apple Blossom All-Service Club Luncheon on May 2 at the Convention Center.  The lunch starts at 11:30.  Tickets are $25.  See Alan Walker for tickets.  We are looking to have two tables of members to represent our club.  Dan Lewis, former KOMO anchor, will be the speaker.

Elza (our youth exchange student) is having a birthday party (17 years old) Wednesday at 2:00 at Walla Walla Park (shelter #1).  Her WHS Applettes Dance Team competed in the state competition a week ago.  She is going to the youth exchange outbound orientation Saturday, and then to Disneyland with Earl's family in a couple weeks.

Jerry Karney is back from a two-week trip to South Carolina, D.C., New Jersey, and New York.

Carol Adamson's grandson spent a couple days with a volunteer from his time at Children's Hospital. They went to the zoo, climbed trees, and Riggan was give a NYFD helmet from 911.

Alan Walker brought chocolate chip cookies for John McDarment (who had said he would donate $100 for everyone who brought him cookies for his birthday).

Tom Utigard talked about our former exchange student that he keeps in touch with.  He also said the deer and mountain sheep are around now.

Jim H. attempted to show a TED Talks video, which eventually worked.  The talk was on procrastination.  I decided I had best get the blog out today, otherwise it would be May. 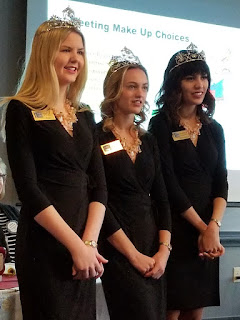 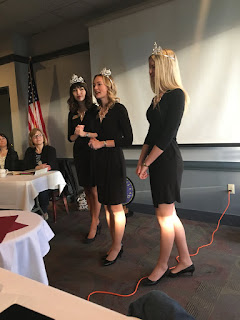 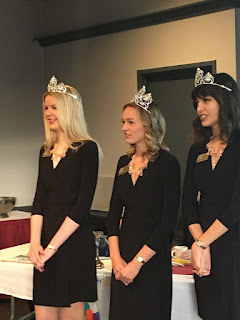 The Program Today was the Apple Blossom Royalty.  It was great to have them visit.  Here are some pictures.

They spoke to us about their individual aspirations.  So well-spoke and wonderful to listen to!
By Unknown - April 01, 2018 No comments: