There is a tentative dinner planned for everyone who volunteered for the bike ride - Sept 10th time and location to be later announced.

Earl - Emma made it home from Germany safe
Robin - Her birthday was the 22nd and she paid $1 for leaving early
Alan - Paid for missing ruths project
Jill - Went through an orchard inspection
John - Went on an epic family hike.

Presented a slide show with lots of interesting pictures about their trip to Tanzania and showed us a bit about the 450 solar powered lights that they packed and took with them.
By Kaitlyn V. - July 29, 2019 No comments: 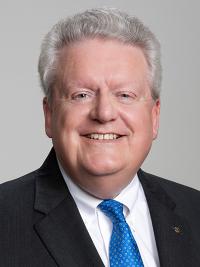 Mark Daniel Maloney is a principal in the law firm of Blackburn, Maloney, and Schuppert LLC, with a focus on taxation, estate planning, and agricultural law. He represents large farming operations in the Southeastern and Midwestern United States, and has chaired the American Bar Association’s Committee on Agriculture in the section of taxation. He is a member of the American Bar Association, Alabama State Bar Association, and the Alabama Law Institute.
This year's Rotary theme is "Rotary Connects the World" 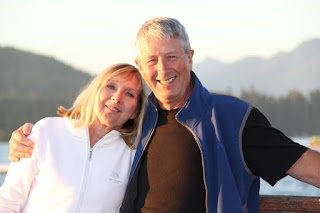 Peter Schultz (with wife Susan) is from the Kelowna Club. He was a research scientist and restaurant owner, and is now spending his time in service to his community.  Peter has been active in several leadership roles in his club and in District 5060.  He says, "As I travel the district this year I very much look forward to renewing old friendships and making new ones!  We have a tremendous opportunity in our district to "Be Inspired" as Rotary International President Barry Rassin encouraged us in 2018-2019, and to "Connect the World" as this year's President Mark Maloney would have us do!  We are strong, with a growing membership, tremendous activities and projects both locally and globally, and the positive leadership we need to Grow Rotary.

Guests
Joel Banken brought his wife Julie as a guest.

Ruth Dagg asked for volunteers to help plant foliage at the Habitat For Humanity house at 931 Methow St. on Thursday, July 18th from 8-11 am.

Invoices have been sent out this week.

PJ Jones bragged about a mini-family reunion. A good time was had by all!

Jim Adamson briefly discussed a European river cruise he and wife Carol just completed with 30 other people from the Wenatchee area.

Carol Adamson said her grandson went to San Antonio, Texas, to compete in FBLA, and finished 3rd in the nation in his category.

Lisa Parks presented Kathleen McNalty, Club Treasurer, with a Board of Director gift, and personal gift for helping Lisa during her presidential year.

Erik Holmberg and PJ Jones announced 2 conditions you will have to pay $1 fine; leaving early from the meeting, or being late to attend the meeting. Several club members rushed to pay the fines. Lisa Parks was fined for having missed the last two meetings.

Assistant Governor Karl Ruether polled the club to see who remembered what this year's Rotary theme was. PJ Jones correctly identified "Rotary Connects the World" and was awarded a lapel pin with that phrase. 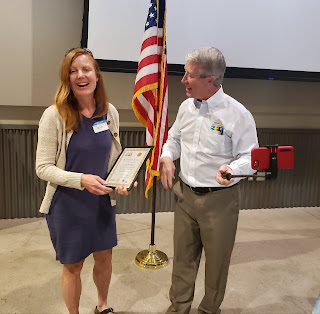 Peter Schultz also presented Wayne Massing "The Rotarian That Connects the World" award for his work as the District 5060 Promoter for the recent Rotary International Convention in Hamburg, Germany. 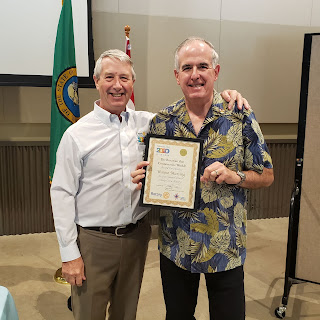 "Why Rotary?", asked Peter Schultz. Lisa Parks said she joined Rotary to give back to the community and networking. Jim Adamson agreed with networking, and added service, fellowship and international connections. Jim Huffman reminded the club of the connection Rotary International has with the United Nations, having helped with its original charter in 1947. Robin DeRock was hooked on the Youth Exchange program within Rotary.

DG Peter Schultz agreed with the Youth Exchange aspect of Rotary. The students are exposed to "a life in a year" concept when they travel abroad.

Peter explained his trip to Ethiopia with a medical team. Open pit fires were the cause of may injuries there, so the medical team repaired burn victims' limbs.

Chapter One Clubs are a goal of Peter's. The Chapter One is related to the first chapter of the Rotary Procedures Manual. Simple and easy! This manual is downloadable from the District 5060 site (https://portal.clubrunner.ca/50005/User/Login).

Ryan McKelvie , Director, Head Coach for WAHA/Wild Development Teams, from the Wenatchee Wild Hockey Team reminded the club that they need housing for 4 local hockey teams. Contact Ryan if you would like to host a hockey player. (rmckelvie@wenatcheewildhockey.com)

Invoices will be out this week.

Habitat for humanity needs more volunteers for the landscaping project contact Ruth to get signed up.

Earl - Parking for the 4th of July went good just about $2200 was raised. Volunteers for parking include: Kaitlyn, Ethan, Mansour, Taro and his son, Earl, PJ, Robin. Volunteer for the next day clean up were: Ethan, John Schapman, PJ, Earl, Milt, and Ruth and her son.

Erin bragged about the USA women's soccer team winning the world cup for the 4th time.

Leslie talked about her granddaughter and how she is a healthy baby.

Kaitlyn gave a short talk about her time at RYLA

Watched a TED talk on procrastination.