Elza went to Revelstoke, BC last weekend with the district's youth exchange students and had a great time curling, sledding, and playing in the snow.  She didn't get much sleep over the 4-day period.
The WHS Applettes Dance Team is doing well, and will be going to district competition.

Ruth Dagg will give Tastebuds gift cards to anyone who brings in a new bike ride sponsor.  She presented cards to Lisa Parks and David Barshes (2) today.  Who will be next??

Lisa Parks talked about her PETS (President-elect Training Seminar) held in Seattle last weekend.  There were over 500 PEs there from 9 districts in California, Oregon, Washington, Alaska, and western Canada, along with assistant governors, district governors-elect, RI officers, & speakers and small group facilitators.


Fellowship Dinners - Membership committee has proposed a fellowship event where 2 Rotary couples host 2-3 other couples for dinner.  The idea is to invite at least one or two potential members, and maybe someone already in the club you don't know very well.  Time frame is the week before and after St. Patrick's Day (March 10-24).  Contact John McDarment (669-6965) if you can host, or if you would like to be invited.

The Boy Scouts of America this year will honor Erik Holmberg with The Good Scout Award.  If you would like to come to the banquet to support Erik, contact John McDarment (669-6965).   The event is at the Wenatchee Convention Center on March 28.  Tickets are $30.


Robin DeRock needs host families for the youth exchange students who will be staying overnight on May 21.  Call her if you can host one or two that night (741-9079).  She can give you more details.

Craig Reese is off to Braundi for a couple weeks to work with his charity there.
Annie LaCroix was late today because she stopped to administer CPR to a person on the streets of Wenatchee.
Jill Courtney is headed to Florida for a couple weeks.
Ruth Dagg bragged about Stage Kids being one of the best non-profit groups.

Stacy Spear gave a presentation on SAGE (Safety, Advocacy, Growth, & Empowerment).  This organization provides free assistance for victims of all sorts of crimes, abuse, domestic violence, etc.  They have a shelter for 19 women and children, and volunteers and staff that provide support for physical needs, transportation, counseling, and more.  They have served over 800 people.  Stacy also talked about domestic abuse - types, affects, causes, and the cycle of violence.  She talked about why many women don't leave an abusive situation, and what can happen when the victim does leave.  They get grants and funds from their Gala (March 10).  They are also putting on a shoe drive.  Carol Adamson has volunteered to collect any women's shoes and/or clothing you want to donate.  Bring them to any of our meetings, or to her house.

Bowling party with Challenge Scholars and families - Sunday (Feb. 25) at 2:00 at Eastmont Lanes - everyone welcome.

Fellowship Dinners - Membership committee has proposed a fellowship event where 2 Rotary couples host 2-3 other couples for dinner.  The idea is to invite at least one or two potential members, and maybe someone already in the club you don't know very well.  Time frame is the week before and after St. Patrick's Day (March 10-24).  Contact John McDarment (669-6965) if you can host, or if you would like to be invited.

The Boy Scouts of America this year will honor Erik Holmberg with The Good Scout Award.  If you would like to come to the banquet to support Erik, contact John McDarment (669-6965).   The event is at the Wenatchee Convention Center on March 28.  Tickets are $30.

Next Bike Ride Committee meeting will be at 6:00 Monday, March 19 at Bob's Burgers & Brew.

Habitat for Humanity is building the Interact sponsored house now.  They will need volunteers near the end of March and April to hang dry wall, paint, etc.  This would be a great project, and a way to support our local Interact Club at WHS.

Rani Sampson went to the Apple Blossom Queen selection to support her neighbor, Sophie Castillo, who was chosen as one of the princesses.
Chris McDarment's son, Brian, made it to the finals in state swimming (WHS took third in state), and he and Holly celebrated their anniversary.
Jim Richardson has been in Olympia for college stuff (politics), and had a nephew ordained to pastor two churches in Pennsylvania.
Erin McCool's little brother and his wife are having another child in a few months.
John Schapman's son started pre-school, and he attended a successful auction to support the school.
Alice Thompson is back from an amazing ski trip to Austria (88 lifts).
Lisa Parks will be attending PETS (President-Elect Training Seminar) in Seattle this weekend, and Jim & Carol Adamson will be there to facilitate.
Alan Walker bragged on Lisa's Apple Valley Gymnastics event which his granddaughter participated in.

Joel Banken gave his classification talk today.  Joel was born in Nebraska, then moved to Grants Pass, OR before coming to Wenatchee.  In between he did an exchange in Mexico.  Joel attended PLU prior to going to UW medical school.  He worked at the East Wenatchee Clinic from 2001 until just recently, when he began working out of the Stemilt Clinic, where employees and families of Stemilt get free medical care.
Joel loves to travel, visiting places that include China, Europe, and Ecuador, where he was
a Peace Corp volunteer.  He also volunteered at Holden Village.  Some of the travel and volunteer work was with his wife, Julie.  They have two boys, the oldest of which is our YE outbound student in Thailand this year.  Joel and his family have hosted two youth exchange students last year, and will host two more this year, including Elza.

At the end of the meeting, Jim Adamson showed some slides of the RI Headquarters in Evanston, IL. February 23 is Rotary's 113th birthday, and some the history is preserved there at One Rotary Center.

Our next meeting is NOT on Tuesday, February 13th.  It is on WEDNESDAY February 14th at Bob's Burgers and Brews in East Wenatchee at 5:30 p.m.

Bike Ride Meeting in Monday, February 12th at 6:00 at Bob's Burgers and Brews in East Wenatchee.

Lisa reminded us that the District Conference is in Prosser on May 17-19.  Register online here.

Also, if you are not attending and would like to join in Rotary Hospitality and Service, we need hosts for Rotarians that may be traveling to Prosser but don't want to do the full trip in one day.  Those Rotarians would need a guest room on May 16th, 17th or 20th.  Even if you are going, you can host them on the nights you are still here.  Get a hold of Jim Adamson for more information.

The program today was presented by the Wenatchee Valley Museum. Two people showed up in costumes from 1905 and taught us a bit about our Valley during that time.  It was a lot of fun! 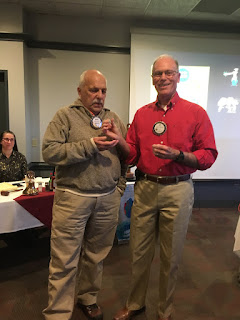 New Meeting Space!
We now meet at the Rivertop Grill in the Coast Wenatchee Center Hotel 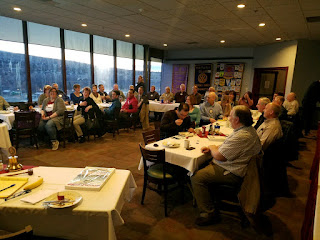